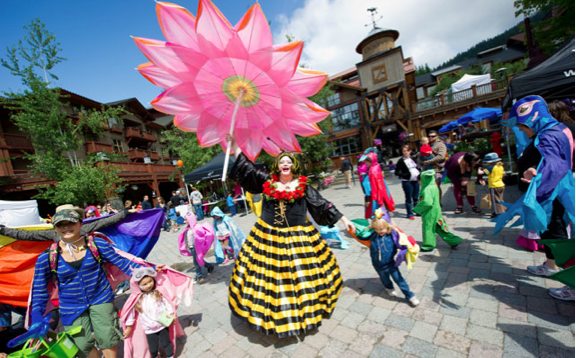 It looks like it may be another summer for the record books, with Tourism Whistler (TW) confirming July as the busiest in the resort's history and August pacing ahead of last year. Paid room nights for the month of July, which saw major events on tap like the Whistler Children's Festival, the nearby Pemberton Music Festival and the Ironman Canada race, were up 10 per cent compared to last summer's record July.

Tourism Whistler's VP of marketing, Louise Walker, attributed the strong numbers not to one single factor, but "a combination of some really good things, like a vibrant village, our festivals and events, a strong product, good marketing, value and an excellent reputation."

But room night volume wasn't the only area that saw a boost; revenue per available room was trending positively as well, Walker noted, adding that TW does not share confirmed RevPAR stats publicly. "That combination of growth in visitation and rate is really good for businesses because it means we're seeing people come and spend more money, stay overnight and participate in activities," she said.

Another figure that stands out is the major growth seen in the destination market, with visits up 16 per cent compared to last July, due in part to increased visits originating from long-haul American states. The regional market also saw a slight bump of five per cent. Destination visitors account for 85 per cent of the nearly $1 billion spent in Whistler annually, and shell out an average of $160 a day in the summer, according to a 2013 report by the RMOW's Economic Partnership Initiative Committee.

Building up mid-week bookings is always a key priority for Tourism Whistler and this July showed progress to that end, with occupancy rates hovering just under 70 per cent for July, a 10-point jump over last year. Despite the improvement, Walker identified mid-week as one of the biggest periods for potential growth in the resort. Weekend occupancy rates for the month were over 80 per cent, a three-point hike. While official tallies for August are not in yet, Walker indicated the month is pacing "positively ahead" of last summer and that, despite the Ironman triathlon being rescheduled to July this year, the resort hasn't seen a drop-off in visitor numbers. we really think it was a good win to move Ironman from August to July," she said.

Tourism Whistler's recent marketing campaign, which Walker said has received positive feedback from guests, focused on raising awareness of what's on offer every summer in Whistler, and included packaged itineraries developed around particular themes. "What we found from our research is that not everyone knows all the great things there are to do in the summer," Walker said, "So we really wanted to make sure that people knew of all the things there are to do and help package it together for them into a vacation."

This entry was posted on September 1st, 2014 | Posted in General

With over 30 years of Whistler history, Laurie is the perfect choice to purchase or sell your Whistler property. Laurie has been an active volunteer in the community as a School Trustee, a Director of Tourism Whistler, the Vice Chair for the Whistler Arts Council and the Secretary of the Whistler Museum and Archives Society.